10 years ago, since the time I was at high school, I played the trial version of a Vietnamese game name “Galaxy war”, there were just 3 places which I could choose as my base: Ho Chi Minh, Hue and Ha Noi. I was so disappointed and I asked why don’t they put Da Nang in, but the answer of the moderator even more shocked me, they don’t even know Da Nang (what the heck…@_@). But just after 5 years since that day, my city suddenly became a brilliant star of Viet Nam, instead of an American military based, people in Viet Nam started to name my city as “the city of the beautiful beaches”, “the city of resorts”, “a young and dynamic city” and “the most worth living city of Vietnam”. As the start of this blog, I want to proudly introduce you some of the most exciting things about my city, Da Nang and I want to call it “Da Nang, the amazing city”.

A city of wonderful beaches

Stepping on the sand of Da Nang beaches and you can never forget it. “Today the beach is one of Asia’s prettiest–and most historic, the yellow sand stretches for almost 20 miles (32km) , and the traditional round Vietnamese surf boats are one of the best ways to ride the waves” – 2005, Forbes magazine , and that definitely is not a lie.

With the sand field like salt or sugar under your feeds, Da Nang beach give you the soft and comfortable walking time along the long infinite sand field. Then, when you want to take a bath, the water is warm nearly all year and water is low enough so that your head is still above the water after 20m walking toward the sea.

Da Nang Firework Festival is one of our most famous events which is hold in 2 days, 30/4 and 1/5, 2 years once. In these days, you can watch and hear the firework performances of 5 teams from all around the world countries on the music background. 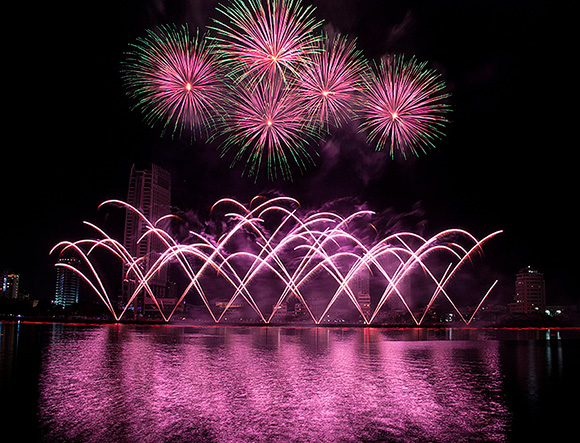 The experiences always be so different, it is not only the normal colorful firework performances which you can see in every countdown party, it’s the art and the stories which is told by a party of light and music. It’s so hard to explain if you cannot see it by your eyes but you can imagine that it is just like when you playing music on the Window Media Player with the firework Visualizations bursting in front of your eyes, that’s an unforgettable moment.

This year, 2015, the city also has a new Light festival which have never happened before with some demo pictures below:

The city of bridges

Just look at these bridges below of my city, you can see actually they are not really just the normal bridges but artifacts:

The bridges have a strong attachment with my city development and it is a really long story which need to be told in a whole different post, “A bridges story”. Anyway, which one is the most beautiful one? What do you think ? I love the elegant of Sailboat bridge and Nga Ba Hue bridge.

The most worth living city of Viet Nam

That’s the unofficial award of my city which is given by Vietnamese people, and I can feel both honor and responsibilities. There are many kind of awards which given by organization which can tell you about the reasons for that name just like:

– The Top 1 of Provincial Competitiveness Index among Vietnamese city in 5 years.

But with me, it is the life here is so peaceful. First, there are nearly no traffic jam so that people can get up at 6am, have breakfast, have a cup of coffee with their friends, read some news and go to the office at the right time in 8 am.

Second, people are really helpful, just try to ask for the way in my city, you will receive a very particular instruction if they really know and they even can go with you to show the way if it is on their way. But careful, people sometime can try too hard to remember and show you what they think right just because they don’t want to disappoint you, the best solution is always asking more than 1 person.

And all that is just a glance and a little of my stories about my city, see you in the next posts: Danang history – A love story.